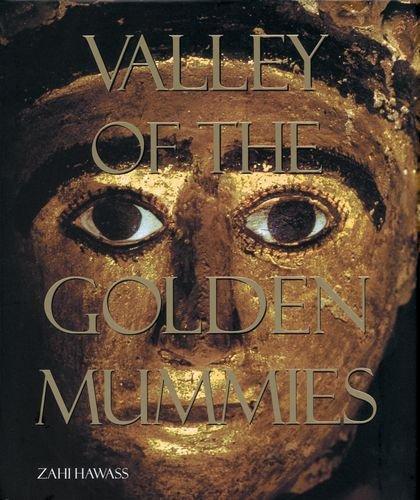 The astonishing discovery of the Valley of the Golden Mummies in Bahariya Oasis, deep in the Western Desert of Egypt, is considered perhaps the most spectacular Egyptian archeological discovery since that of Tutankhamun's tomb. This vast site was uncovered by accident, when a donkey stumbled into the opening of one of the many underground tombs of a 2,000-year-old cemetery believed to cover approximately two square miles. Never before have so many mummies been discovered at a single site: multi-chambered tombs dating from the Roman period in Egypt held rows of mummies, many adorned with gilded masks and painted cases, others wrapped in linen. Whole families were found placed together. Jewelry, pottery, amulets, and other artifacts were also uncovered, and it is estimated that as many as 10,000 mummies may ultimately be uncovered from the site, which has escaped plunderers and is thus remarkably intact.
Featuring some 250 color illustrations, most of which have never before been published, this exciting book reveals the lives, customs, and religious beliefs of this until now little-known community. It will both fascinate and enthrall all those with an interest in the ancient history of Egypt.

"synopsis" may belong to another edition of this title.