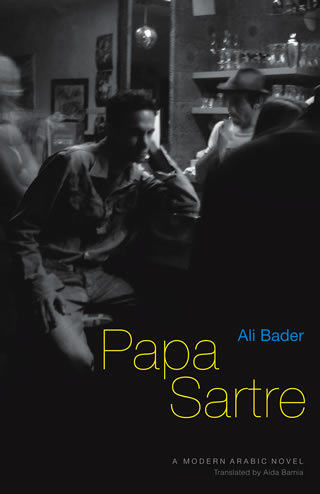 An ironic view of Iraqi intellectual life in the sixties
After a failed study mission in France, Abd al-Rahman returns home to Iraq to launch an existentialist movement akin to that of his hero. Convinced that it falls upon him to introduce his country’s intellectuals to Sartre’s thought, he feels especially qualified by his physical resemblance to the philosopher (except for the crossed eyes) and by his marriage to Germaine, who he claims is the great man’s cousin. Meanwhile, his wealth and family prestige guarantee him an idle life spent in drinking, debauchery, and frequenting a well-known nightclub. But is his suicide an act of philosophical despair, or a reaction to his friend’s affair with Germaine? A biographer chosen by his presumed friends narrates the story of a somewhat bewildered young man who—like other members of his generation—was searching for a meaning to his life. This parody of the abuses and extravagances of pseudo-philosophers in the Baghdad of the sixties throws into relief the Iraqi intellectual and cultural life of the time and the reversal of fortune of some of Iraq’s wealthy and powerful families.